Nazi literature in the Americas 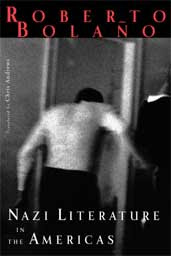 Published as an English translation by New Directions just a few weeks ago, Roberto Bolano's Nazi literature in the Americas ( translated by the effervescent Chris Andrews) can only be described as a tour de force, a feat of imagination. It stands alone as one of its kind. It will remain so. The pace of this novel and the guttural thrust of its prose forces the reader to read it as quickly as the words dart off the pages, sinking later, virtually, into our skin, leaving one exhausted by the brilliant sheen of its virtuosity. This novel is a magical literary exercise and for those already familiar with Bolano, a reminder of his genius, flair and verve.

Published as Historia de la literatura Nazi en America, this is actually a breezy history of fascist writers and their literary works, exclusively of the American continents. However, all of the writers are imaginary and all works mentioned fictional. All the writers mentioned including their works are constructed, brought to us with a style and panache that blurs the line between the real and the virtual. Divided into various sections on the basis of genre, it traces the desperate lives of those mentioned, lives of aspiring novelists, poets, philosophers and essayists, entries ranging from a few pages to a para to just a few lines. Most of the writers have espoused deviant and notorious paths to personal and literary fame, some with extreme right wing ideologies, ranging from the outright messianic to racist to futuristic extravaganzas of imagination. Nowhere does the holocaust come into consideration nor is it the main aim. Some writers have been personally cuddled by Hitler, but the title of the novel is misleading.

As is often the case in his previous works, Bolano maintains a distance from the writers, sketching their lives with an ease that seems nonchalant. But, this is only an outer veneer. The intention is to parody or satirize these tiny literary people, lost now to the world but in the process, even though their weak and sometimes shallow romanticism is exposed along with their changing political and literary affiliations, the dominant feeling is that we are reading elegies, a series of them, a train of restlessness, for that is in essence what these short biographies are. Bolano paints a picture of desperation, for life is always desperate and these lives more so. They might have been supremacist or wicked, for that too is constructed on myths and rumour, but the emotions they had were mostly open and sometimes clandestine. As John Brenkman writes "The reductive force of summary after summary starts to have an effect that transcends the satire; the book begins to convey a sense of the vanity of human endeavor and the ease with which a lifetime's work might be flicked into oblivion by a witty remark".

One can see clearly that this work is a forerunner of The savage detectives, in which an incredible number of writers and poets danced macabre. As was the case there, the lives of the writers here are, as we see them, burning and bright with funereal flares, are mostly lived at the edges, in anonymity or in chase of glory, and after a few luminous and brief flickers, they disappear into anonymity. These writers might be strange and psychopathic, deviant and chained to strange fantasies, yet they latch on to their world with words and books, armed with poems, publishing often extravagant and sometimes bizarre works, and rarely that one exquisite poem, that one knife that plunges home. And their lives are brought to an end with the force of violence, like something crashing in front of us, abruptly, ending disconsolately, without tears, sometimes rebellious, often without defiance, sad, haunting and melancholic.

The contents of this novel are divided into various sections, named variously as Itinerant heroes or the fragility of mirrors; Magicians, mercenaries and miserable characters; The Aryan brotherhood being one of the many. The book ends with a fabulous section called Epilogue for monsters......devoted to secondary literary figures, publishing houses and with a complete bibliography of the various works mentioned. Each chapter ends rather abruptly, like the writers themselves dying suddenly or having taken their own lives, or growing old in obscure towns and now devoted to odd jobs, selling odd things or working at garages. I will mention a few vivid examples:

"Death took him by surprise seven years later in his comfortable apartment, as he listened to a record by the Argentinian composer Tito Vasquez, and looked out of the window at night falling over the city, passing cars, people chatting on the sidewalks, lights coming on and going out, and windows being closed". Or this:

"In Africa he found what he had been looking for: the fitting repository for his soul. He never returned to Chile. He spent the rest of his life working as a photographer and as a guide for German tourists".

Humour is a device that runs throughout these pages. It is mostly dark and often macabre and conveys a sense of decay and ennui. It mocks and derides and as the writers sometimes cry and whimper, we are rushed into their secret fantasies, amazed at their lack of fatigue. The section called Epilogue to monsters is an example of vivid invention but not entirely unique. However, the uniqueness is in the poetic brevity of these entries, with death and oblivion conveyed in a few lines only. Some examples:

Duchess of Bahamontes. Cordoba, 1893-1957. "Duchess and Cordoban. Her platonic lovers numbered in the hundreds. Urinary problems and anorgasmia. A fine gardener in her old age.
Arthur Crane. New Orleans, 1947-Los Angeles 1989. Poet. Author of a number of important books, including Homosexual Heaven and Disciplining Children. He indulged in suicidal tendencies by frequenting the underworld and hanging out with lowlifes. Others smoke three packs of cigarettes a day".
Otto Haushofer, 1871-Berlin, 1945."Nazi philosopher. Godfather of Lux Mendiluce and father of various harebrained theories: hollow earth, solid universe, original civilizations, the interplanetary Aryan tribe. He committed suicide after being raped by three drunk Uzbek soldiers".
Augusto Zamora. San Luis Potosi, 1919-Mexico City, 1969. "Known as a social-realist author, although he wrote surrealist poems in secret. For more than twenty years he fooled his colleagues into believing that he could speak Russian. He saw the light in 1968, in a cell in the Lecumberri prison. He died in the street of a heart attack a month after being released".

Two chapters, one called The Fabulous Schiaffino Boys ( here) and the Infamous Ramirez Hoffman are mini masterpieces in themselves. The former traces the lives of two infamous soccer fanatics, and the latter that of a pilot, in whose death Bolano is complicit. This is Bolano speaking of the hypocrisy that he so well depicted in By night in Chile. As Ramirez's killer tells Bolano, to find a poet, "I need the help of another poet. How much are you going to pay me?" and when the man is dispatched, the killer says, "look after yourself Bolano". The narrator of By night in Chile was complicit and guilty, part establishment, priest, writer and yet deaf to the tortures of a military dictatorship. As Bolano clearly pointed out, how can one even write when people are being murdered, disappearing and yet, even if one writes, how can one endure the hypocrisy of being silent...............

The life of Irma Carrasco, described as a woman of letters, inclined to mysticism and tormented phraseology, is Bolano of the savage detectives. After many vicissitudes, even after being a devoted wife, her husband Barreda has left her for a younger woman. He is back for a last hello and Irma receives him in her lounge. The scene and their last conversation is literally brilliant, with pathos and sentiment keenly balanced and an eye for dialogue without letting us forget the occasional melodrama of the situation, as Barreda drinks Tequila and Irma drinks rompope. The end is a disaster, he walks out, Irma cries, "deaf to everything but her own voice softly repeating an invitation or an exorcism or a poem, the flayed part of a poem, shorter than any of Tablada's haikus, her only experimental poem, in a manner of speaking". We are reminded that "there were to be no more poems or little glasses of rompope, nothing but a religious, sepulchral silence until her death".

Quite often, the enthusiastic reader goes overboard in praise and exaggerates the merit of the written word. We often get embroiled in cliches, claiming so and so as masterpieces. Nazi literature is a genuine masterpiece, dazzling fireworks, literary acrobatics, concise mastery, prose poetry sublime, a hell, a literary heaven. The lives littering the pages of this book might look outwardly strange and their written works deliriously titled, yet they are all possible or plausible. Bolano lived, by his own account, a savage life. Did he know he would become famous one day? The lives he has documented in book after book are in many ways the story of not one generation but many, not one nation but so many and not of one language alone but of each one perhaps. As I said earlier, the title of this novel is misleading, for the lives and writers and their books are as he writes rhapsodized in bars, on streets, in dungeons, in prisons, across borders, in exile, perfected inside hearts and sung on lips, and then lost in that transit from pen to paper.

Maybe, for the uninitiated, this might be the wrong Bolano to begin with. That said, it should be read by everyone, for whom literature and literary lives hold an enigmatic and tight hold. In fictive fugitive fiction of this kind, poetry leaps like a moth before the very flames that will eventually singe it to death. Oblivion in death, poetry before oblivion, what more do we want?
Posted by Kubla Khan at 7:30 pm

bolano is perilously near the top of my need to read this very soon pile purely as a result of your recommendations. will let you know how i get on

The blurb on the New Directions page suggets that this novel is full of allusions and parallels to other author's spates, disputes and careers; I take it that a sketchy knowledge of Latin American authors does not in any way affect the enjoyment of this book (which sounds very enjoyable indeed!)

By the way, love your blog. Read it every few days. I wish I had the energy you have on display here, just in writing all of this.

yes, there is no need to have any sort of knowledge to read nazi lit.
in fact, Bolano's characters are quite unwordly generally. they live on the fringes, between poetry and prose.
glad that you like this blog and i am going to visit your blog too!