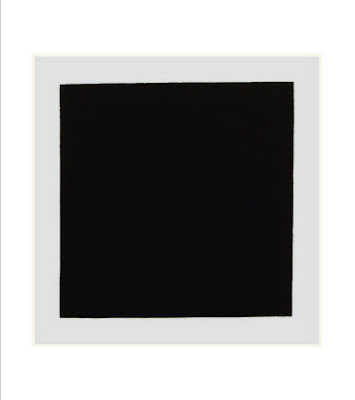 "One of the minimal definitions of a modernist painting concerns the function of its frame. The frame of the painting in front of us is not its true frame; there is another, invisible, frame, the frame implied by the structure of the painting, the frame that enframes our perception of the painting, and these two frames by definition never overlap.....an invisible gap separates them. The pivotal content of the painting is not communicated in its visible part, but located in this dis-location of the two frames, in the gap that separates them. This dimension in-between-the-frames is obvious in Kazimir Malevich ( Black square on white background), in Edward Hopper, and again in Edvard Munch's Madonna..........The frame is always redoubled: the frame within reality is always linked to another frame enframing reality itself. Once introduced, the gap between reality and appearance is thus immediately complicated, reflected-into-itself: once we get a glimpse, through the Frame, of the other dimension, reality itself turns into appearance. In other words, things do not simply appear, they appear to appear. That is why the negation of negation does not bring us to a simple flat affirmation: once things start to appear as what they are not, creating an illusion; they can also appear to just appear, concealing the fact that they are what they appear to be".

Slavoj Zizek, The Parallax View
Posted by Kubla Khan at 12:33 am

I have read his essay on David lynch's Lost Highway and also seen his documentary The Pervert's Guide to Cinema which was hilarious and very entertaining... He has a great gift of "synthesis" bringing together lots of ideas and themes from different places to one place. I of course understand very little of what he says... may be with time.

Is The Parallax View a collection of disparate essays or is it one single book on a specific subject?

Zizek has the habit of throwing one thing after the other at the reader, with the reader feeling that Zizek is upto tricks.....there is considerable erudition and as you say, much fun too. this is social and cultural crtique at its best really though we have to make an effort to understand still.

the parallax view is not disparate but has a consistent theme about this gap of what is visible and is not with a lot of fantastic digressive insights. he brings to philosophy insights from popular movies including as you quoted on Lynch. he seems to know "everything".
however, i have his Interrogating the real book, which is a collection of essays, one of which is from the parallax view.

i was much impressed with his On Violence,which i read a few months ago. i recommend that heartily.

To read the parallax view and Zizek generally, we need to be familiar with Hegel and Lacan. i have recently bought Lacan's Ecrits but have abandoned it. Academic philosophy generally is difficult for the likes of me. we can but try.

thanks, I have read some of his articles and essays in mainstream press (he regularly writes for London Review). He is certainly very sharp about the self-serving contradictions of the "liberal" and democratic politics, specially as practiced in the capitalistic west although for the same reason some also feel that he is irresponsible and cavalier in his statements on authoritarianism and communism.

interrogating the real, i don't know if it is the same essay in which he discusses The Matrix. Will see if i can find it out..

I have struggled a lot with academic continental philosophy recently and also last year but haven't been able to make much headway. Lacan also features a lot in film theory books...i have absolutely no clue whatsoever what he is all about.