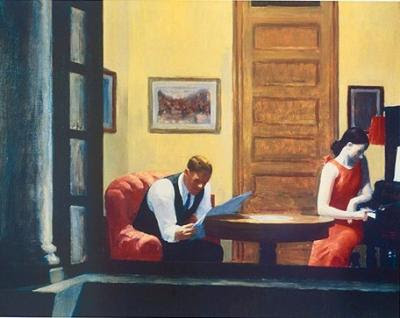 The above painting by Edward Hopper, the great American realist of the inter-war era is certainly not his best but certainly symptomatic of the vital concerns of his art, which as I am getting acquainted with, are as important now as they were decades ago. In fact, while his influence was on the wane in America after the second war ended, he began to get more resurgent towards the end of the sixties, near his death. The social, political and existential cultural interpretations of his paintings are equally important now as they were before.

The painting above called Room in New York was the first painting of Hopper's that struck me quite recently and in my slightly disquiet manner, I decided to read it on my own, without recourse to any formal or informal intro to his work. I decided to do thematic apperception with the above picture, a pastime of mine from the past. The picture above is actually quite open and not that difficult to read. Hopper's use of muted colours in the background seems distinct to me. The couple seem to be alienated not only from each other but from their surroundings. The room seems as oppressive as the alienation that is evident from this scene.

The man seems lost in the paper, as if deliberately, self-consciously and the woman is actually making a concerted effort to shield herself. She is reading or holding a book, a book that holds no interest for her, I think. However, there is a muted restraint between the two, a restrain born of respectable indifference. It may however be that the two are not in any relationship past or present but are simply waiting for someone else though in that case, the two seem to be representative of that class which is busy with itself alone, keeping in march with the relentless march of ruthless alienating capitalism.

What I find interesting is the table between the two, bereft of anything, clean and harmless and yet enabling the two to share a certain proximity, with his paper and her elbow in proximity to the table. The man leans towards the table, she turns away from it, as if in repulsion. It also suggests a certain familiarity with the furniture, thus the room could be theirs or it could be a familiar hotel room. The bareness is evident in the room, the muted colours, lack of inessential things in the room and the stern formal dress of the man and the conservative dress of the lady.

Scenes of urban ennui, alienation and a kind of despair are recurring themes in Hopper's work and are not uncommon concerns in the art of that era. However, with the advent of so called post-modernism, these concerns have not faded away. Instead, instead of fading away, the sense of desolation in the face of one technological onslaught after another, reducing ethical and other social concerns to just a chimera, have made the urban architecture ferociously anti reflective. Hopper's scenes and paintings convey the sense of being surrounded, the space as it is suggests enclosure, thus the loss of perspective perhaps and in other places as of urban spaces that are too endless but lonely, dull and morose.

It is not enough to just convey or portray an image of existential ennui but to do it convincingly in an aesthetic manner and which appears naturally melancholic and not affected in any way. This is admirably done by Hopper in his many paintings including his drawings of urban city cafes, shops, drug stores, lonely spinsters, old and forgotten houses near lighthouses and more famously his painting called Nighthawks where he conveys his vision of a city diner, empty stools, vacant expressionless faces, after work despair and a very un-nameable melancholic city grief.

However, this art is not just urban but encompasses and revivifies that very state that it so vividly shows in all its sordid candidness and in that effort, in that plunge, becomes great and timeless art.
Posted by Kubla Khan at 8:31 pm

very illuminating and beautifully written...really impressed by your attention to detail and also your intepretation.

Ed Hopper's paintings are quite "open"so to speak, in various ways.his figures always suggest that they are in some kind of turmoil and are not "wooden" by any means.the sense of distance between each other, from the environment and of the unique space depicted from the rest of the world is quite striking.

It always seems to me that Hopper imposes his own mood on the scenes he depicts--and that this is style that encompasses all work. To me, it is claustrophobic, and what makes him a mere stylist. Like Andrew Wyeth, who only does Wyeth, all Hopper paintings are relentlessly Hopper. I think you are totally reading all this social commentary into the scene in the painting being considered; a heroic attempt, but to me the signal thing about that painting is the use of the color red.

You may be right about the colour, i couldn't say.

The claustrophobia is evident only by comparison, in other paintings, there is space which might suggest narrowness.

regarding "imposing moods", that is the essence of any work of art.....a moodless work of art is a caricature. the mood leads to ripeness, which is all.

yes, I agree with kubla. bachelard spoke of the 'monotony of the genius' - the artist is relentlessly himself, 'imposing', consciously or not, something that could be perhaps called 'mood'. this reminds me of Barthes' definition of 'style', as being rooted in the artist's corporality/temperament.

Pretty nice post. I simply stumbled upon your blog and
wished to mention that I have truly enjoyed surfing around your weblog posts.
In any case I'll be subscribing in your feed and I hope you write once more very soon!

All in all, the speed and incline offered within the Schwinn
860 is rather appropriate for the cost.

On this variety of human body body weight training session, you
are only using your very own body's pounds as resistance.

The automatic decreasing of your operating platform is
actually a remarkably praised aspect also as how effortless it is to fold up.

I appeared at other adjustable dumbbells ahead
of I decided within the Powerblock model.

Using your vitamins everyday can help make certain that it does.

It has two 1/2 inch rollers that reduce friction and dress
in for the devices if the tread is operating.

Depending on the dumbbell bodyweight set that you simply decide
on, it may be as high-priced as two thousand bucks.

There may be a wide variety of pre-programmed exercise packages to obstacle you like interval instruction for hills, joggers, or to burn fat.

You write very sophisticatedly, really enjoyed reading your post.
This might be a long shot, but isn't the lady sitting on a piano stool, slightly leaning against the piano and barely (and lazily) touching its keyboard (instead of a book as you said above)?