all stories are crime stories 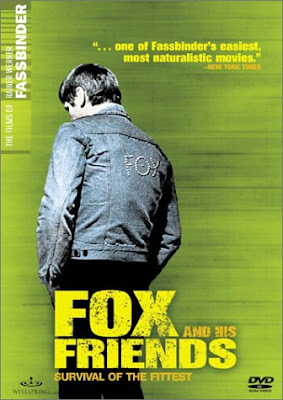 All stories are crime stories, so said Fassbinder once. In his world, or as he saw it, Fassbinder envisages people using emotions not just blackmailing weapons but sometimes as cunning ploys to extort. This extortion is either then used for a material advantage or for emotional gain. The person who gets used isn't always usable but is in a state where he or she is at a disadvantage. Fundamentally, Fassbinder sees these situations as crimes that people commit against each other. We can also see everyday situations precisely as situations where we actually take advantage of people who are in one way or another either dependent on us financially or emotionally or as subservient to our inner desires, whims or fancies. I do not see Fassbinder's claims as extravagant, in that he dramatizes situations to an extent and we see a melodrama and the criminal use, if one is permitted to say, of that melodrama.

Even in non-women films, Fassbinder acutely asks the same relentless question. In his 'women' films like is Petra Von Kant or Lili Marleen, the women are shown to use their emotionality to a certain end. Once a character is perceived as weak, then the other person will go out and eventually destroy him or her. Change this to a more broader social situation, say the role of guest workers in Germany and the same ethos is shown at work. In essence, once a person is pushed against the wall, and there is no way that this person is given any space to maneuver, that in itself constitutes a crime.

In Fox and his Friends, where Fassbinder himself played the leading role, money is clearly a weapon that is used as a fulcrum in an emotional relation. If Fox had no money, which he does acquire after winning a lottery, he would not have gained entry into the upper-bourgeois world he finds himself in. He does not choose the change of class but falls in love with a charming man. However, the charming man uses Fox emotionally and takes him only as an object of love in bed but does not ever forget to remind him of his class differences. Once Fox has been deprived of all his lottery money, he no longer is of any use to said people. His whole emotionality is thus shown as amounting to nothing other than something that can be taken advantage of. If Fox had not fallen in love, he could have charted a different course for himself. However, once he has fallen in love, his emotion is treated farcically by his lover, who has no use for a working class fair ground talking fox.

Fassbinder does not just hint at an emotional difference between the so-called lovers but also, once Fox is destroyed, the lover' dad hints that "in principle, it is the only way of dealing with them". Hence, class differences are also shown as a tool for exploitation but also as a tool necessary for doing so. Love thus serves only as fodder for continuing exploitation, be it Fox or others. Hence, an emotion which we seemingly accept as benign and important actually ends up as distancing us from those who either pretend to or we think we need to love or protect. Love thus ends as a weapon that alienates us from the loved one and becomes an object of mere brandishment. It is thus sharp as a knife and gets waved considerably in our face. It is mostly sharper than a knife and the word is subsequently quite misused.

Fassbinder's treatment is to show its vicarious use, not its total uselessness. In general terms, he was a very romantic man and only a person blind to colour and sentiment would refuse to see how he created movies that are artistic and very politically conscious. In all his important concerns, this usage of people occupies a prominent place and the viewer should never choose to ignore its importance. If a person is strong, then should the person not fall into any kind of emotional state? Is strength hence an ability to ward off all emotions and stay away from all sources that may lead to such anxieties? Fox betrays himself to the extent that he does not think he is being manipulated. Fox does not betray himself because he falls in love.
Posted by Kubla Khan at 8:32 pm