the loneliness of the long distance runner 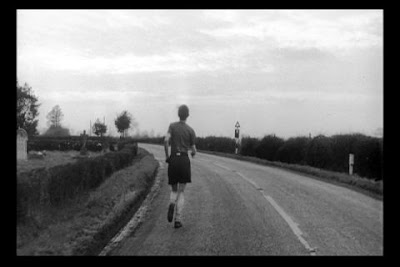 In its current manifestation, British cinema, with only very rare exceptions, has become prey to the kind of thing that is labeled as political correctness. This sort of enforced attitude does not allow the creation of any genuine piece of criticism nor does it allow those conditions to thrive that allow vigorous critiques of state or cultural trends. Once a particular attitude is considered more useful, from a point of view of non-confrontation, then whether it is literature or cinema, genuine works of art will never arise. This is in contrast to times in Britain, in the early and late sixties, where at least in cinema, certain movies were made that allowed the expression of certain points of view, be it those of people who were marginalized because of class or other less conspicuous distinctions. Since art without any political tones is merely a pose, it is only in true works of art that political manifestations can become evident.One of these movies is based on a play by Alan Sillitoe and is called The loneliness of the long distance runner.

The movie was very popular I understand in the sixties and surrounds the times at a reformatory of 'an angry young man', Colin, who gets sent there following theft at a bakery. At the Borstal, the man in charge realizes that the young man has potential as an athlete and assigns him the task of winning a long distance cross country run against the local public school boys. Hence, the confrontation is quite obvious, the outcast against the establishment boys and the movie makes no bones about it. Colin whilst practising his runs, lapses into reveries and thus previous events are told in a flashback. From a poor background with a dead father and a working class mother with other siblings, c lapses into petty crime and theft. His attitude is typical of a young man who sees no future in a society where the workers, like his dad used to be, have no future of actually realizing their true potential. The rebellion against established mores and against enforced class distinctions is very obvious to the troubled young man.

"You play ball with us and we will play ball with you" is the first warning shot that the Borstal boys hear. Colin past allegiances , to his family and friends, his girl friend filter through his mind and yet, in a very menacing but vague manner, his acts of petty crime are tokens of resistance against a system that perpetuates class distinctions. This is shown strikingly in a scene when he and a friend lower the volume of a newly acquired television and mimic and laugh at the posh accent on the television. When Colin finally participates in the race, he leaves his nearest 'posh' opponent a mile behind but decides not to cross the finishing line. He chooses to wait as a spectator and even makes way as his opponent wins the race, much to the stunned dismay of the Borstal school authorities, who are in a way, wounded and bemused. Colin's act of defiance seems to him a signal manner not only to react against the establishment inside and outside the reformatory, but also to show an alliance with his fellow detainees, who fear that he may have turned to the 'other side'.
The performance of Tom Courtenay as Colin is a master class in restraint and quiet menace. The bleak country side shown, the English town of the sixties, in the Midlands, the working class set up of his family and the general aura that surrounds the characters is extremely authentic. This movie does what a thousand other books and movies will usually fail to achieve. The established order that Colin fights against may have changed as the country has changed in the last few decades but the interior structures of power are still virtually untouched. The movie ends with Colin shunned by the Borstal authorities but he is at least content in reverting to what he sees as his real self, which is an affirmation of his acts of resistance against authority but inevitably, his lapse into loneliness, which such acts can and usually lead to. At one point Colin rages and says: "Do you know what I'd do if I had the whip hand? I'd get all the coppers, governors, posh whores, penpushers, army officers and members of parliament and I'd stick them up against this wall and let them have it 'cause that's what they'd like to do to blokes like us."

The loneliness of Colin is not merely a romantic one but extremely real, situated as it is in his 'times' but also outside that of a pure 'time' or place. In that space, in the realization of that resistance, his loneliness is worth the price he pays.
Posted by Kubla Khan at 6:27 pm

how do you have the time to watch and write about so many films, Kubla?!
how fortunate for us :-)
but i can't stop envying you, i wish i had more time for films as well...

"Since art without any political tones is merely a pose" - why do you say that? i can't follow here. is Kawabata's Sound of the Mountain not art? to take just one recent example from our discussions...

Some of the movies that I 'write' about, well, I have seen them ages ago, it is something reminds me of them, and then I want to jot down a few thoughts. I think it is more an attempt to pay my tribute to such movies rather than critique them, since I haven't got any qualifications to do so, more than I have the right to blog anyway.

I could guess that the line you quoted would strike you. I am all for esoteric stuff in art, in allegories and so on. The main problem I face is my lack of imagination, and that lets me down. Hence, the more concrete stuff appeals to me, and any direct political aspirations are closer to me.

Interestingly, I read a very interesting book thi syear called Origins of modern Japanese Literature by Karatani Kojin, a philosopher. His ideas seem to suggest that modern Jpanese li. has arisen out of a political stance, during and following the Meiji era. The second war, its aftermath, the loss of Japanese independence( all modern nation states are semi- independent, you agree?); all this is also a subject in Tanizaki and to some extent in Kawabata. So, I do not see a lack of politics in their works nor any deafness to social changes.

Of course, Kawabata is all art and the 'pose' i mentioned is a stance eventually, isn't it? I think largely I don't disagree with you on this point. let me also remind you of this:

"There is sometimes more pain in a pop song than all of Cambodia", wrote walcott. Politics is not every thing. You now see a contradiction in me, but I can't help that.
ciao