Lina Wertmuller's movie is a lush poem, a desperate poem, a crazy poem. The first scene, the first opening is the beginning of anarchy, then violence, a wide expanse followed by the burst of love and a boy's question: Mama, what is an anarchist?" The anarchist in question, takes refuge in a whorehouse, itself the abode of a revolutionary sympathiser. The house itself, a magnificent picture of art and image, a virulent cacophony of sounds and thighs and breasts and voices. Sin and holiness, flesh and the unholy, our anarchist unsure and feeble, frightened and tremulous and woe upon woe, in the throes of love now.

An image of lushness and riches, loud and colourful. The violent unhappiness of men who fall in love with prostitutes, an anarch 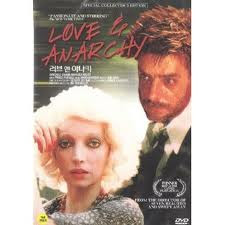 ist in love with a prostitute. "Let us make love without staring at each other", he gets advised and later on, as the day dawns, he is not woken up after a night of love making and the intended assassination target, Mussolini, leaves unharmed. The arrest follows and so does his death. The lover is bereft and besides herself and the world looks.

This is the first Wertmuller movie that I have seen and its energy, its humour and its frantic lushness is a sight to behold. The acting, particularly by Giancarlo Giannini and Melato as his aide is simply wonderful. The whole cast has a manic edge to them and the springboard for activity is shown in all its vibrancy. Their is humour here and it is not without its comic edge but it clearly shows how a common man can be used in any political setup by any political party an then abandoned. It does not help if the protagonist, if he can be called that, falls in love. love is itself an anarchic activity and two anarchies are two too many. A wonderful movie.
Posted by Kubla Khan at 3:59 pm