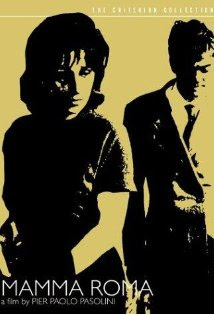 Mamma Roma opens with an image or rather with a painting or the subversion of a painting. Christ's last supper and here Mamma Roma herself, loud and ebullient, inviting pigs to her ex- pimp's wedding feast. Pasolini begins with aggression and a distance from the first scene, and from a distance, the shot of a long wide table. Mamma Roma punning and singing, and we are suddenly privy to her world, this ex-prostitute, who wants to take her son Ettore to the outskirts of Rome, to bring him up as an untainted young man, away from the taint of her ex-profession. Near Rome, the recurrent theme, the ruins, the empty fields, the collections of garbage and rubbish, cathedral domes, long serene and clear shot of a clear sky and Mamma Roma, nameless, Mamma Roma to every one, to her son too, unknowing of her mother's profession of the past. The new scene finds Ettore hanging with bums as his mother opens a stall and sells vegetables now. Her ambition is to graduate to the petit -bourgeois, she attends the church, her eyes are on the daughters of respectable bourgeoisie families, she does what mothers do.

Watching Mamma Roma is nothing short of a drug, an addiction. The two shots of Mamma Roma walking towards us, long sequences, in the dark, the night, delivering two monologues, one crisp and bitingly sarcastic, the other mellow and melancholic, behind her the lights of Rome, nothing visible except darkness and as she walks, she looks at the camera, directly at us, joined by other citizens of the night, who walk and who she leaves behind, the sinuous walk, the serpentine ease, the following gaze, Mamma Roma dares to shock. In the second of these shots, Mamma Roma says that she has an awful ache in her stomach, like I ate my heart out. Ettore has become what she didn't want him to, a common thief, a bum. She tries to lure him away from Bruna, a girl he gives gifts to, who has slept with all Rome. Ettore driving with his mother on his new bike, with his mother clasping his waist tight, I remember this image too, the defiance of her eyes, her language.

Pasolini's A violent life, that I read last year, has similar characters, bums and thieves and prostitutes and pimps, the hangers on, the ruins outside Rome, the fights, the scrapes the dispossession, the marginalized. Mamma Roma wants a piece of that respectability, for her son, for herself. However, Carmine, her ex-pimp returns, he threatens, she must walk the streets again, the highway as Mamma Roma describes it, otherwise he will disclose it to Ettore. The long second monologue shot follows this piece of blackmail, a battered sad Mamma Roma this time, very morose, very bitter. Then Ettore gets caught stealing a radio, gets locked and tortured in a police cell, strapped, almost crucified. Here Pasolini subverts the crucifixion image, the shot is a horizontal one, Ettore cries for mercy, Mamma he cries, save me. Later Mamma Roma, eating bread dipped in milk, looking at the threatening suburban landscape outside, cries for her son, he was innocent she claims, why him?

Ettore's body language is very striking. He sleep -walks through the movie, he seems lazy, very disinterested, not caring at all. There is a lethargy in his body, a lack of motivation in his movements, it translates in how he moves, how he walks. Later he has a bright fever, he is almost besides himself, and later still, he seems restored to himself but suffering as he is strapped now, tortured, bruised, he dies. With Ettore too, Mamma Roma tangos, as she teaches him to, echoes of an Oedipal type, clasping to his waist later on, we are never told who his father is, how he was raised, as she claims Ettore, he must get out of this useless way of his, learn a trade, after all she would get on the cross for her. 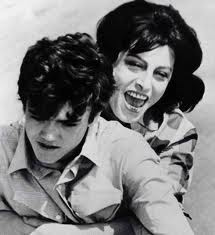 ce, a mesmerizing performance, a piece of acting that confirms the power of cinema, a powerhouse character that she fills with the oddities of her laugh, the black messy hair, the humour, the loud voice, her songs, her sorrow her ambition, her desires her contradictions. Magnani's performance in Mamma Roma is one of the most powerful in all cinema and can only be described with adjectival prolixity. The mind numbs when she walks, little black bags under her eyes, Mamma Roma of the suburbs, of the streets, of dark nights and calm mornings, of the vegetable stall, of figs and artichokes and cunning little schemes, the donna of the streets, the mother, the balancing trapeze artist.

It is all to easy to say this is a movie of social protest. What sets this movie apart from such movies is Pasolini's superior art, for in one blow, he delivers everything. It is perhaps fair to say that he is a Marxist and Catholic in one given moment, a skeptic and mystic combined. His images are those that he revers and subverts. Pasolini combines herein his manifold genius of a philosopher and politician, the writer and camera aesthete and above all, Pasolini the poet, Pasolini the dangerous poet. Mamma Roma looks outside from the window of Ettore's prison cell, restrained by the fruit sellers and other bums, as she tries to throw herself out of the window. The last shot, the most dangerous, the most powerful, the most subversive, Rome at a distance, the emptiness between the two, the dome of a cathedral, the indifferent haze of the day, the loneliness of Mamma Roma, the futility of her ambitions.
Posted by Kubla Khan at 1:04 pm