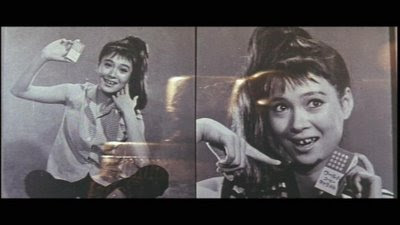 In Yasuzo Masumura's Giants and Toys, the central female character is actually not quite so central. Her predicament is that she belongs to a working class environment, her father is actually in the shadow of her mother who is in the shadow of her daughter who is in the shadow of anonymous poverty. Chance brings her in contact with an ambitious businessman, whose fledgling company sales bring him about to think of an audacious idea to defeat his nearest rivals: use an ordinary Tokyo girl's face for an advert in selling their company's goods. The idea is not to use a model but to use an ordinary looking girl, so that the buying public can identify with her. The buying public are brainless he thinks, they are morons he believes, they go with the diktat of the market. Since consumerism is God, and consumers from various sections of society are devourers of goods, sticking them up with such a girl to identify will help improve sales. The sales improve, the girl is transformed from anonymity to a haute-bourgeois, but the plan does not work to script. Something must be done again.
The transformation of a simple Tokyo girl's entire outlook is as central here as is the mindless consumerism being critiqued for at no point are the company bosses even prepared to show any sympathy for this girl whose love interest in a young man working for the company is genuine and yet who does not realize that his interest is merely to cajole her into accepting this modelling scene. His ambition is to impress his boss; he is clearly interested in another woman who is working for his rival company. In this madcap scenario, everything is morally impaled; the man and his girl and the girl and her boss and the boss and his boss are all interested in using our young naive model into thinking that their main interest is to help her. What she fails to realize is that she is herself becoming what they don't want her to be: strong minded and independent, some one who can make her own decisions. So, when the moment of truth comes, she refuses to accept appearing in their new ad campaign, even after using her love interest, for by now, she has fallen in love with a young man from another company who has now become her manager.

The end is extremely farcical. The boss collapses and coughs up blood because he cannot cope with the strain and his morally upright young understudy, initially defiant of his morally compromised stance, actually puts on a space suit as an ad gimmick as he walks stone faced through a busy Tokyo street, almost like an ordinary street peddler, showing off his company wares, egged on by his old girl friend to actually smile. Our model has faded into anonymity, she is in the hands of her manager, who has already started her exploitation and will continue to exploit her. Giants and Toys is a satire and very well made. The colour scheme is surreal, almost lush with colours. The acting is good but it doesn't demand greatness. The crime stories that I wrote in connection with Fassbinder's work is at full play here. The savagery of modern consumerism, the complete disregard for any human or moral value is shown in all its naked brutality. The mindless competition and its fallout in exploiting young people and public alike is depicted in its shameless hypocrisy, exemplified very well by the official photographer who has no regard for employers of any kind nor for the models used.
The use of women as no more than mere objects is supplanted by the crudeness of the whole system that thrives on such images. The distinction that Masumura would like to drive between a traditional and so -called modern society is very clear here. Every one wants to make a fast buck , as they say. Eventually the poor model too becomes lethal and abjectly inept in choosing her boy friend who is also a savage parasite. Everything has turned upside down. This is a bad bad world and Masumura, even in a frivolous manner is extremely dangerous as he shows the total breakdown of any values. Every one is in the dark. And nothing has changed since this world began. And nothing will. This movie is quite forward of its times and stylistically terrific.
Posted by Kubla Khan at 6:08 pm

This really solved my problem, thank you!.