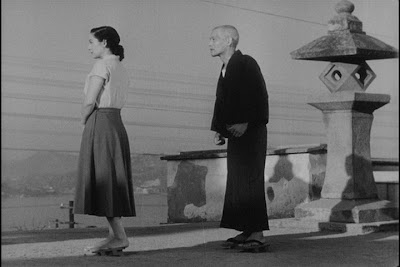 At first everything seems all right. An elderly couple visit their grown up children in Tokyo and nothing appears to be amiss. Then Ozu Yasujiro shows us what looks like a wound. With a knife, he starts scraping the edges of this seemingly benign looking wound and then, relentlessly, he plunges this knife into this festering festering wound. The elderly couple are welcome at their son's house but he has no time for them. Neither does her daughter. They visit one child first and then the other and the only person who takes time out for them is their dead son's widow. The couple are soon booked to visit a spa, which proves a lonely and trying time for them. They return to find their daughter as unwelcoming and as busy as before. The children are considerate but too busy. In the end the couple return home and the ailing mother dies. The children come late but leave soon afterwards as their busy lives command them. And so life moves on.

The most striking things are not that the children are busy but that the couple are resigned to see their hopes dashed. In this resignation is a mix of hope and longing, mixed as both are from events in a distant past, when their children where young, when their children were theirs. Ozu is never benign in his portrayal of this theme. Far from it, when the elderly couple cannot sleep at the spa because of all the revelry going on there, both husband and wife lie fanning themselves, looking resolutely at the ceiling, the husband in his patient fury, the wife in her impotent resignation. He gets up in defiance of something and the next mesmirizing scene, both facing a silent sea is an indelible image in all cinema. It has not just rage written all over it but conveys the futility of all life, all relationships, all hopes and all expectations. the elderly man, played by Chieko Higashiyama is a portrait of stolid acceptance of the couple's circumstances. Children and parents drift apart he reminds his young unmarried daughter, he knows no other way to describe it.
Ozu's use of ellipsis is most marked in his narrative structure, for the journey to Tokyo or from Tokyo to the cheap spa town are never shown. The low shots, famously called the tatami shots are extremely uncomfortable to the viewer, for not only do they convey stillness, they also convey a total lack of resolution. There are no panning shots or at least I didn't notice many. The poetry of everything conveyed is evident but the most important bits are left unsaid, the silent gesture, the unsaid word, the unwhispered hope, matched in technique by the lighting, the shots, the movement-less camera. The last scene to me, in which a boat lies loose on the sea and what we can describe as the roar of a train seemed to me nothing less than angry hissing. " Life is a disappointment", says the old man.

It is usual in film circles to debate which is the greatest movie ever. Tokyo Story as it is also known as, has consistently been voted in the list of all the top ten movies ever made. I find that personally pointless. I remember having read recently that watching Japanese cinema can be dangerous. I find that an apt description in many ways. I always remember Fassbinder when I watch Ozu, though the styles are so different. Fassbinder once wrote that all stories are crime stories. The children here are self-absorbed, they are not cruel, at least not on the surface. I find that the crimes in the family set-up are committed everywhere and by everyone, what Fassbinder describes as the fascism of relationships. The dangerousness of this cinema, its so-called menace is a reflection of our own moral compromise. This must also seen against the break up of the family structure and the transition from agrarian to so-called Western ways of life. The elements of post-war Japan figure in a very noticeable way in Ozu's movies.

Ozu has no intention of removing the knife he has driven in the wound, either in this movie or elsewhere. It is upto the viewer to either acknowledge that wound or to live with that knife.
Posted by Kubla Khan at 6:01 pm

this also happens to be one of my favourite films, those lists in my profile are not complete, in fact they are barely lists...
and indeed Ozu - it is hard to talk about him, i haven't seen any Ozu film that hasn't touched me beyond words. Late Spring, another love of mine.

do you know this:

and it reminds me now of what you wrote about Bolano, how one should stop writing after reading him... or making films after Ozu...

Yes, the dangerousness is perhaps the end of cinema after watching his movies. I find his movies menacing to say the least. The quiet menace, perhaps the Japanese way?

The thing that struck me most about Tokyo Story was how the children are never judged, and how this simple acceptance makes the story so despondent. It comes out in the old man's conversation with his daughter, and his understanding makes the melancholy very terrible and real. It is so easy to see traces of self in that indifference - the 'thoughtful' spa visit for ageing parents, the busy days at work, and those traces make it dangerous and menacing, because accepting it does mean that human relationships are futile and move towards a natural alienation.